Can we really buy everything with money? Who is richer: a person having billions in his bank or a person having someone to love and receive love from? These are the questions which the book Second Chance brings to us.

“Second Chance…if you were given a second chance, how would you change things?” The book poses a question on the reader through the cover page itself. From the beginning itself it feels that there is an element of some kind of surprise in store. It is sufficient to arise the curiosity of the readers. The cover page of the book is very intriguing. It shows a wealthy man walking on a road amidst the clouds and his head is held by a huge hand. It signifies the role of a super power in our lives whom we keep ignoring and fail to recognise.

The book is written by Dr. Sandeep Jatwa. Born in the holy city of Ujjain and grew up in Dewas, in the state of Madhya Pradesh, India. He attained his MBBS from MGM Medical College, Indore. He works at the Government Hospital Sarangpur District Rajgarh. He has been writing since 2006 and has completed two novels. The first is yet to be published and the second one with the title of Second Chance has been published. His most urgent wish is to be able to educate children working on the streets and believes that childhood should be awesome and not a struggle.

Blurb of the book

Second Chance is about a billionaire called Shekhar who believes that he can buy anything with money. Words like love, kindness, pity, sympathy and respect have no value for him. Through the course of his entire life, he has conducted so many evil deeds that he himself cannot recollect. A thorough ruthless and reckless person, he starts getting warnings from the City of Justice to mend his ways but he keeps ignoring them and continues his ways. One day he meets a terrible accident and is taken to the City of Justice. He is surprised and does not believe himself. Considering it to be a joke, he talks rudely with the God of Justice, “you have no rights to punish me,’Shekhar yelled”. When he is shown all his evil deeds by the Bookkeeper in front of God, he feels ashamed. He gets sentenced to go to the hell. His mother’s last wish comes to his rescue and he is given a second chance to improve his wrong doings. What were the deeds for which he was taken to the hell? Will he be able to improve himself? Will an arrogant and egoist person like Shekhar Kapoor acknowledge his mistakes and correct them? 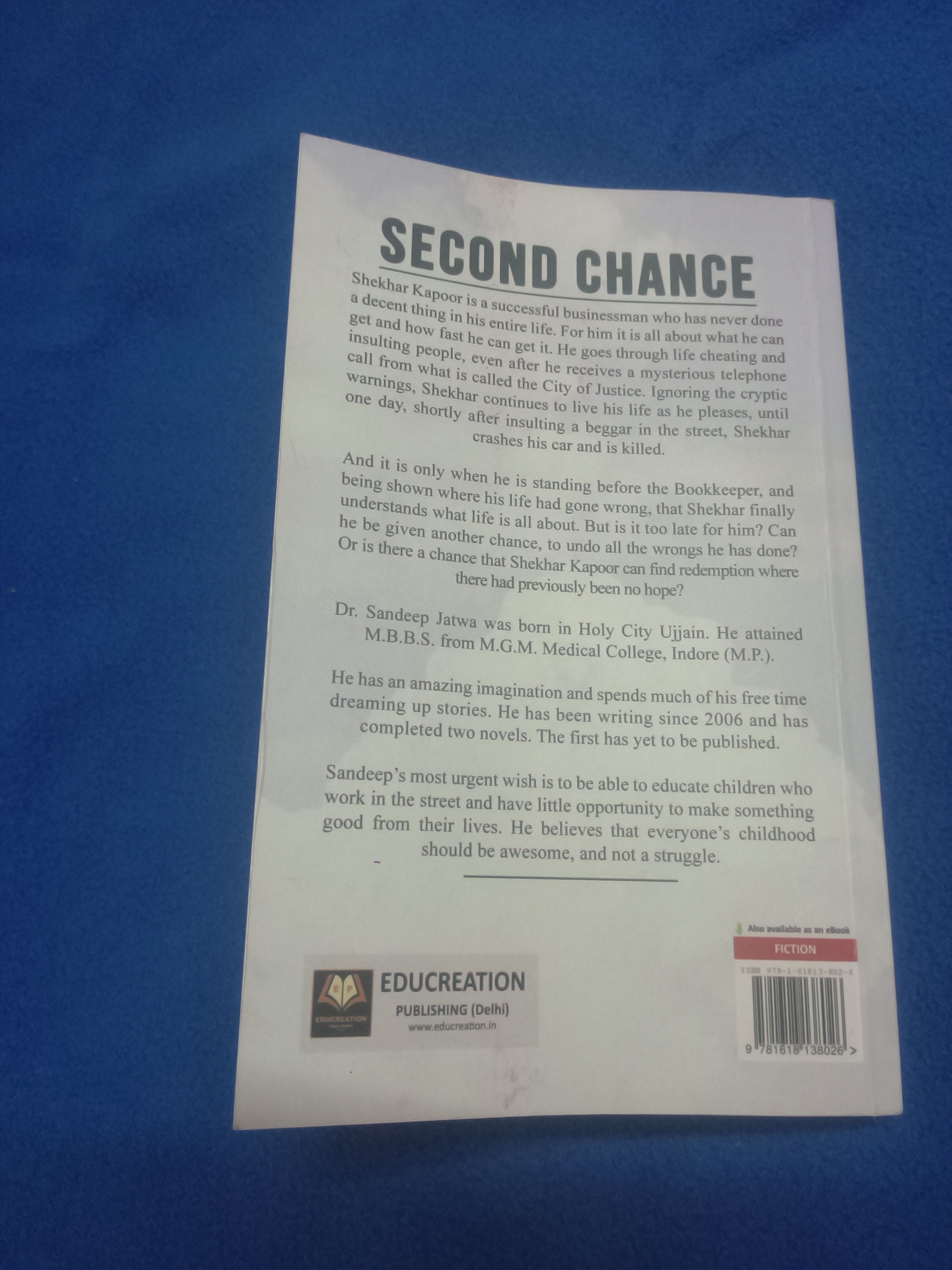 The book revolves around the theme of the cycle of Karmas. If we do good deeds, we go to heaven and if we do bad deeds then we have to face punishments in hell. We have to pay for our sins and no riches, money or wealth of the world can save us from that. Love and kindness go a long way in providing happiness in life rather than money. The moral of the story is very well stated by Manohar Kaka in the book, “a small cottage wherein laughter lives is worth more than a castle full of tears”.

The book is very well written with a very interesting plot. The narrative is able to hook the reader and keep them engaged throughout its course. The language is simple and comprehensible. The story unfolds gradually seemingly predictable at the beginning it brings in some surprises. The characters are portrayed very vividly and realistically. The protagonist, Shekhar is not a hero or someone you would fall in love with immediately but on the contrary is someone the reader as well the other characters in the book hate from the beginning. The character, Shekhar, evolves gradually. He is made to see his folly and is directed towards improving it. The narrative becomes too descriptive while presenting the scenes of the City Of Justice and the punishment he has to go through in the hell, “he stood on a red hot land, whimpering for mercy with smarting and impotency on his face. The remains of his shoes were hanging from his ankles and his suit – a rag now – was totally drenched in his perspiration.”

The narrative becomes dull and slow paced during the descriptive scenes of the City of Justice and Hell but picks up pace after that. The second part of the book which deals with Shekhar trying to correct his wrong doings is very interesting. There are elements of surprise and suspense which are unfolded in the end. The love story of Shekhar and Unnati is very sweet and subtle, “the most beautiful and golden hearted girl was his and now he was feeling himself to be the luckiest person in the world”.

The book provides its reader with a much needed lesson and thought to ponder over in its closing lines, “life changes when you open the door of your heart for love…no money can give you contentment and happiness”. Overall the book is surely worth reading and keep you engaged with some good morals and learnings too.

Note: I received a review copy from Vinfluencers in exchange of an honest review.